Our monthly Industry Update provides an overview of what’s impacting the U.S. transportation industry nationally and globally. This edition covers updates for December 2021.

The U.S. economy expanded an annualized 2.1% on quarter in Q3 2021, slightly higher than 2% in the advance estimate, but below forecasts of 2.2%. Personal consumption increased more than initially expected (1.7% vs 1.6% in the advance estimate), mainly boosted by international travel, transportation services, and healthcare while spending on motor vehicles and parts declined. 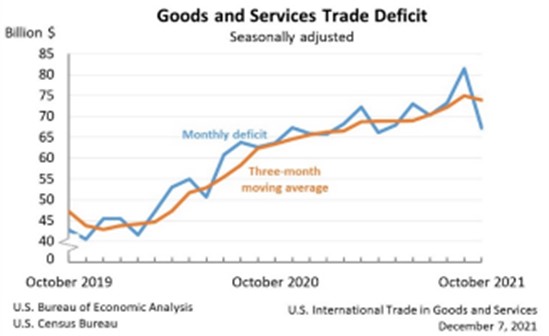 Retail sales remained strong in October, although consumers might have started holiday shopping early, thereby disrupting seasonal adjustments. Sales rose 1.7% after a robust September. However, some of the gains in sales are due to higher prices. With inflation at a 30-year high, the consumer is getting less “bang for the buck.”

U.S. residential investment has been soft lately, but that is not an immediate cause for concern as demand remains elevated. Housing starts fell 0.7% to 1.52 million in October, down from a revised 1.53 million rate in September. While multi-family starts were up 7.1%, single-family starts dropped 3.9%.

The U.S Bureau of Labor Statistics reported that nonfarm payroll employment rose by 210,000 in November, and the unemployment rate fell by 0.4 percentage point to 4.2 percent. 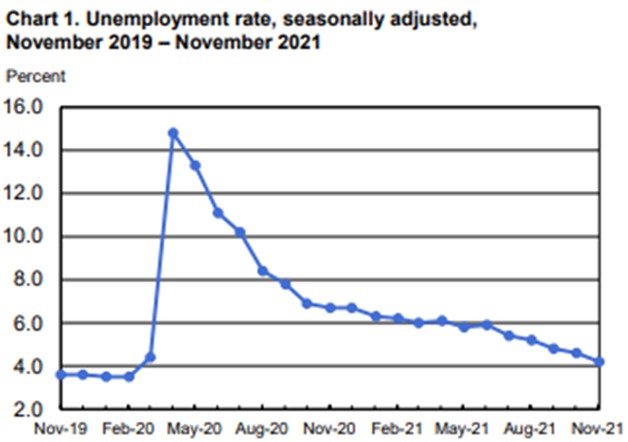 After surging about 32 cents in October, diesel prices flattened out in November and then fell 4.6 cents a gallon in early December. The national average price is still nearly $1.15 above the same week a year ago. Crude prices have dropped sharply recently, at least in part due to worries over the COVID omicron variant. West Texas Intermediate is trading in the mid-$60 per barrel — about $15 less than the price just a couple of weeks earlier.

U.S. regular gasoline retail prices averaged $3.39 per gallon (gal) in November, a 10 cents/gal increase from October and $1.29/gal higher than in November 2020.

The Biden administration unveiled a plan aimed at boosting the number of commercial truck drivers as part of a broader push to unclog supply-chain bottlenecks.

Administration officials on Thursday said the plan aims to get more drivers on the road in the coming months by making it easier and faster for them to get certified and by jump-starting or expanding apprenticeship programs through carriers and other employers with trucking fleets. Overland Park, Kan.-based trucker Yellow Corp. and grocery chain Albertsons Cos. are among the companies that have committed to such programs.

The plan also aims to improve industry retention and the quality of trucking jobs, senior administration officials said. The Transportation and Labor departments will examine how drivers are paid—a sore spot for truckers who often spend hours waiting to pick up or unload freight—and investigate truck-leasing programs that administration officials said prey on drivers. The agencies will also get feedback from industry groups and labor unions.

The 2021 truckload rates outlook is basically unchanged from the prior forecast at about 19% higher, excluding fuel. The 2022 forecast remains +2.2%.

Intermodal rates are expected to maintain the same pattern of slowing growth rates over the next year that was predicted last month.

The Morgan Stanley index moves upward as it snaps a streak of recent declines but continues to lag seasonality. The index broke its downward trend and increased sequentially this week after two updates of decline. Despite the increase, the TLFI continued to underperform seasonality as outperformance in the supply component of the index was not enough to offset underperformance in demand.

Dry-van TL spot rates appear to be stabilizing and remain 14% above year-ago levels. Strong demand trends (including above average use of spot market capacity) likely continue into the next 6+ months.

Refrigerated spot TL rates are 20% higher compared to year-ago levels. Our work indicates the largest disruption is on outbound CA markets and dislocation due to imbalanced demand. Refrigerated rates are at prior peak (mid-2018).

UPS Inc. has a last-minute lump of coal for some large shippers: new delivery surcharges that take effect Jan. 16, three weeks after the company’s 2022 rate increases take effect and one day after its fees on peak-season deliveries fall away.

In a notice posted Tuesday on its website, the Atlanta-based company (NYSE: UPS) said it will impose surcharges of 30 cents per package on all domestic ground residential deliveries, and on parcels moving via its SurePost program with the U.S. Postal Service, where UPS inducts large-scale volumes deep into the postal network for last-mile deliveries to residences.

The company will also impose a $3.50-per-piece surcharge on shipments that require so-called additional handling and a $40-per-package surcharge on “large” packages that exceed 96 inches in the shipment length or 130 inches in combined length and girth.

The four surcharges taking effect next month will remain until further notice, UPS said. The levies will be lower than those currently in place through the peak delivery cycle, which ends Jan. 15. 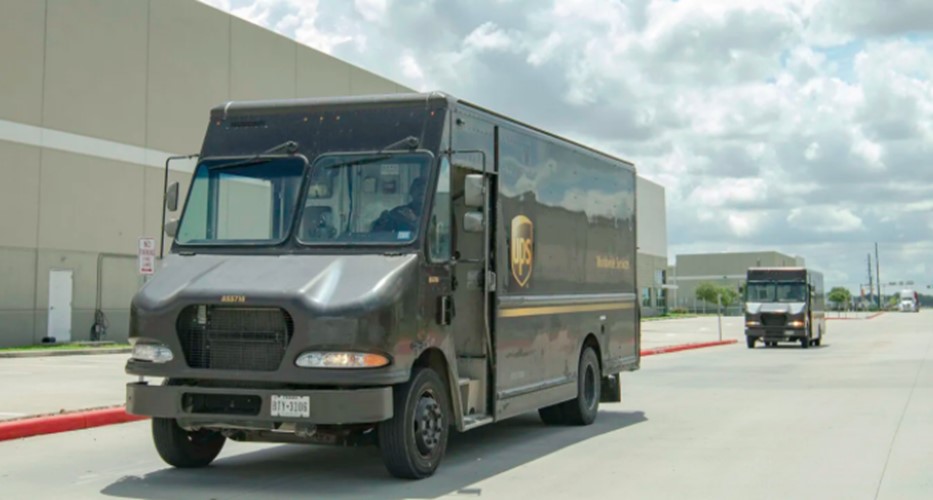 Old Dominion’s GRI latest in round of early rate bumps

Old Dominion Freight Line (NASDAQ: ODFL) is the most recent less-than-truckload carrier to implement a general rate increase (GRI). The carrier announced Thursday a 4.9% hike to rates under various class codes effective Jan. 3. The GRI will start two months ahead of a similar increase it installed earlier in 2021.

Less-than-truckload carriers typically issue GRIs annually to account for cost inflation throughout the network. The increases are applied to general tariff codes not under contract and vary by lane and shipment type. The stated percentage increase is an average of the overall impact the rate changes will have.

Some of Old Dominion’s customers will also see “a nominal increase in minimum charges with respect to intrastate, interstate and cross-border lanes.”

The transportation money is being made available immediately to 25 projects in 19 states. Next year, the amount of money for port improvements will nearly double to $450 million in grants annually for five years under President Joe Biden’s new infrastructure law.

“U.S. maritime ports play a critical role in our supply chains,” Buttigieg said with the Dec. 23 announcement. “These investments in our nation’s ports will help support American jobs, efficient and resilient operations and faster delivery of goods to the American people.”

Biden on Dec. 22 touted the coming grants as one of a series of efforts that will alleviate supply bottlenecks over the short and long term.

The grant money includes $52.3 million to help boost rail capacity at the port in Long Beach, Calif., with a new locomotive facility, 10,000-foot support track and extensions of five existing tracks to speed up freight movement while cutting down the number of truck trips required to do that. 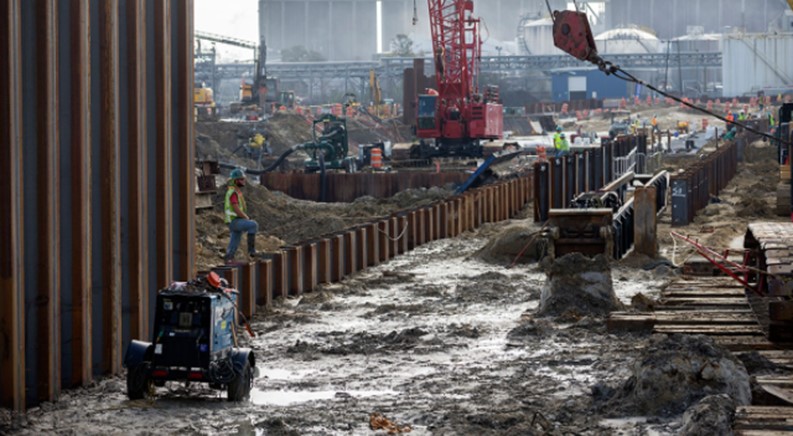 The load to truck ratio from DAT is a strong indicator of the balance between demand and capacity. Changes in the ratio could mean changes in rates. The higher the ratio, the tighter the capacity is for a particular state.  As of December 13, 2021 DAT Hot States, the state with the highest load to truck ratio was Wyoming at 24.85 and the lowest North Carolina at 3.01.

In May 2020, truckers were in Washington, D.C., protesting low freight rates. They claimed the low rates could force many of them out of business. Just 18 months later there’s more high-paying freight than truckers can handle.

The protests came immediately after the end of the initial pantry-stocking in response to the first lockdown phase of the pandemic in 2020, which resulted in surging freight volumes. Truckers’ concerns were legitimate as far as freight rates were concerned. But since then dry van spot rates have almost doubled, increasing to a national average of $2.56/mile, excluding the fuel surcharge this week.

The three-month period between May and July last year was rough for many truckers, though, especially those that didn’t receive loans from the federal government’s Paycheck Protection Program (PPP). For those that did manage to survive, it didn’t take too long before low diesel prices and rising freight rates meant record-high profit margins.

In fact, within 16-weeks of the Washington “Mayday” protests, diesel prices dropped $0.34/gal and dry van linehaul rates surpassed the highest rate recorded in all of 2018 — a freight cycle driven by the tightest capacity the industry had seen in a decade.  Since the pandemic began, the 2021 average dry van rate is currently 46% higher than the national average of the four years prior to the pandemic ($1.60/mile). This has fueled a new generation of owner-operators.

“The claim that the pandemic drove the country to e-commerce is almost a cliché. It is true that the percent of retail revenue flowing through e-commerce jumped from 11.4% in Q1 of 2020 to 37% in Q2. However, what is not being reported as much is that this percentage has been falling over the subsequent 5 quarters. In fact, it is now at the level (13%) that it would have been if the pre-pandemic growth rate of 0.2% per quarter had continued. In other words, we have regressed to the mean. Total retail sales increased a whopping 1.7% in October. While some of this was due to higher prices, the majority was spent on advanced buying – cannibalizing the demand we usually see closer to Christmas.”

Spot rates in the dry van sector last week remained flat last week for the third week in a row. The national average spot rate ended the week where it started at $2.60/mile. Dry van spot rates are still 16% or $0.40/mile higher than this time last year. 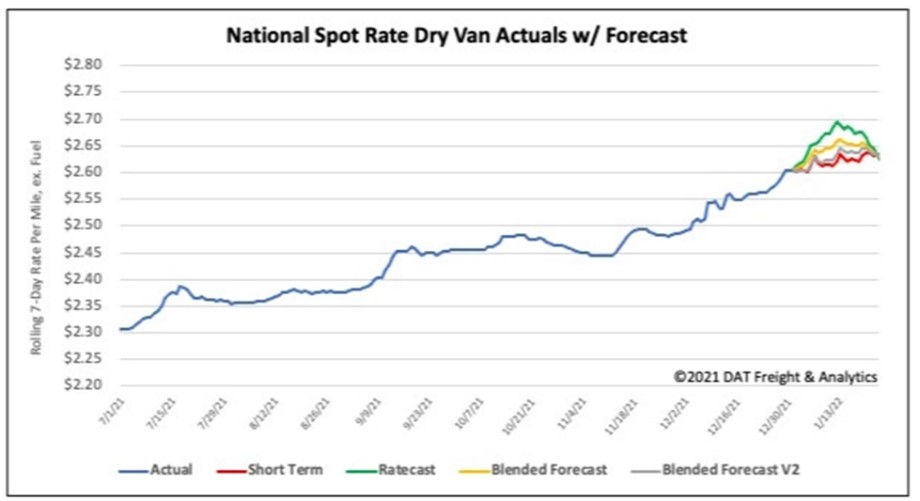 Now that we are well into December, the holiday shopping season is nearing the finish line. The question remains how have the existing factors fluctuating from economic indicators to the twists of the COVID-19 pandemic affected the season so far. Just before Thanksgiving, the Bureau of Economic Analysis released data showing that U.S. economic growth slowed to a modest 2.1% in the third quarter.

The global supply chain disruptions may continue well into 2022 as experts are forecasting. Measures to contain COVID-19 can affect manufacturing and shipping operations, which is exacerbating an already depleted supply chain crisis. With the newest COVID-19 variant, Omicron, becoming the latest obstacle, many workforces continue to rev up. Production shortfalls are behind the current contraction in global trade volume, but logistic bottlenecks are hindering the total output.

Doug
Frank
Senior Vice President of Procurement
Doug Frank is the Senior Vice President of Procurement at GEODIS, supporting our Contract Logistics team in the Americas Region with over 20 years of Supply Chain experience. Doug is a seasoned Supply Chain subject matter expert who provides guidance to position GEODIS as an industry thought leader.
Connect with Doug on LinkedIn