Our monthly Industry Update provides an overview of what’s impacting the U.S. transportation industry nationally and globally. This edition covers updates for November 2021.

The American economy expanded an annualized 2% on quarter in Q3 2021, well below market forecasts of 2.7% and slowing sharply from 6.7% in Q2. It is the weakest growth of pandemic recovery as an infusion of government stimulus continued to fade and a surge in COVID-19 cases and global supply constraints weighted on consumption and production.

The U.S. Census Bureau and the U.S. Bureau of Economic Analysis announced that the goods and services deficit was $80.9 billion in September, up $8.1 billion from $72.8 billion in August, revised. September exports were $207.6 billion, $6.4 billion less than August exports. September imports were $288.5 billion, $1.7 billion more than August imports. 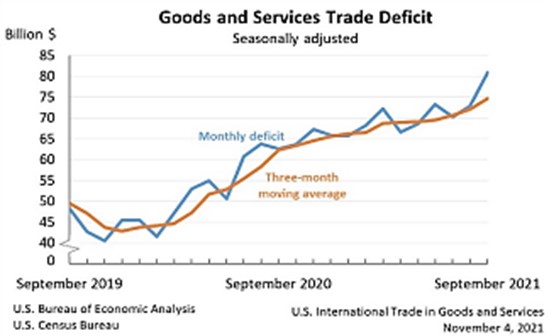 The ISM manufacturing index eased slightly in October, pulling back just 0.3 of a point to 60.8. However, the growth in new orders decelerated as that component of the index declined 6.9 points to 59.8. The production component of the index was essentially unchanged. Manufacturing fell 0.7%, the second consecutive decline. Demand remains vibrant, but supply chain problems are slowing production and contributing to inflation.

U.S. residential investment has cooled recently as housing starts have declined in two out of the last three months. Housing starts fell 1.6% in September to 1.555 million annualized units. Single-family starts didn’t budge, remaining at 1.08 million. Multi-family starts, which are volatile, fell 5% to 475,000. Leading indicators suggest the cooler trend will prevail in the near term with permits falling 7.7% to 1.589 million, a one-year low.

The U.S Bureau of Labor Statistics reported that total nonfarm payroll employment rose by 531,000 in October, and the unemployment rate edged down by 0.2 percentage point to 4.6 percent. 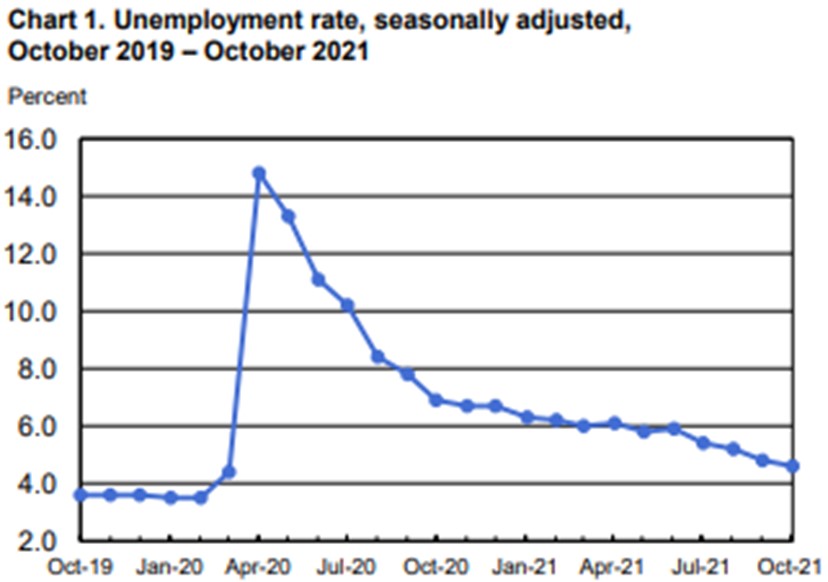 Over the past five weeks, diesel prices have soared about 32 cents to $3.727 a gallon, which is the highest price since early October 2014. Prices are up about $1.35 from a year ago. Crude oil is now trading in the mid $80 per barrel range – the highest in more than seven years. U.S. regular gasoline retail prices averaged $3.29 per gallon (gal) in October, up 12 cents/gal from September, and $1.13/gal higher than in October 2020. The October price was the highest monthly average since September 2014.

Freight transportation companies are cautiously stepping around a Covid-19 vaccination requirement while trade groups fight the federal mandate in court.

Companies including United Parcel Service Inc., Amazon.com Inc. and others that manage warehouse staffers, truck drivers and other employees across logistics networks in general aren’t requiring employees outside of some office workers to get vaccinated against Covid-19. Many firms say they are encouraging staffers to get vaccinated while mandating protection measures in workplaces.

The federal mandate, which is slated to go into effect Jan. 4, exempts workers who are exclusively outdoors and don’t report to a workplace where they interact with others.

The outlook for intermodal rates is for growth in rates to slowly decline and hold near flat from the middle of 2022 through the end of next year.

The Morgan Stanley index falls sequentially for the first time since September but remains in line with seasonality. Our index broke its recent upward sloping trend this update and fell sequentially for the first time in weeks. This result was driven by an underperformance in both the demand and supply components of the index, although we note that the overall index continues to perform roughly in line with seasonality.

The shipments component of the Cass Freight Index® was 0.8% higher than the year-ago level in October, similar to the 0.6% y/y increase in September. On a seasonally adjusted (SA) basis, our shipments index recovered 2.8% m/m in October, after falling 4.9% m/m in September, partly due to Hurricane Ida. The two-year stack reversed to a 3.2% increase from a 1.3% drop in September.

Dry-van TL spot rates appear to be stabilizing and remain 14% above year-ago levels. Strong demand trends (including above average use of spot market capacity) likely continue into the next 6+ months.

Refrigerated spot TL rates are 20% higher compared to year-ago levels. Our work indicates the largest disruption is on outbound CA markets and dislocation due to imbalanced demand. Refrigerated rates are at prior peak (mid-2018).

UPS shippers better fuel up for higher surcharges in 2022

Effective Nov. 15, the Atlanta-based transport and logistics giant will raise its fuel surcharges by 1% on all its U.S. air and ground services, according to a source familiar with the matter. The upcoming levy comes on the heels of a 75 basis-point fuel surcharge increase that UPS (NYSE:UPS) imposed over the summer.

UPS sets its fuel surcharges weekly from a range of price points based on the diesel and jet fuel prices set by the U.S. Energy Information Administration (EIA). 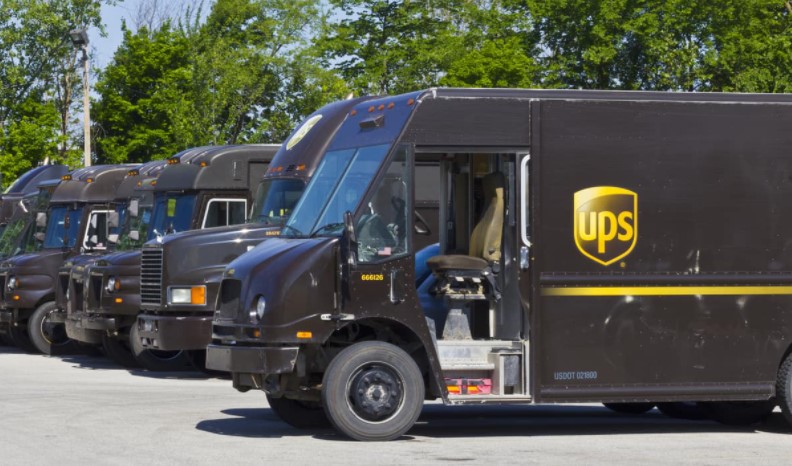 After posting record results in the third quarter, several publicly traded less-than-truckload carriers have announced that the positive trends have carried through October.

Asset-light trucking provider Forward Air (NASDAQ: FWRD) announced Tuesday that its expedited segment, which includes LTL, truckload and final-mile services, saw tonnage increase 16% year-over-year with revenue per hundredweight, or yield, up 11% during October. The result pushed revenue per shipment in the division 52% higher.

President Joe Biden signed his $1 trillion infrastructure deal into law Nov. 15 on the White House lawn, with a smattering of Republican lawmakers on hand for what could be one of the last shows of bipartisanship ahead of the 2022 midterm elections. The president hopes to use the law to build back his popularity, which has taken a hit amid rising inflation and the inability to fully shake the public health and economic risks from COVID-19.

With the bipartisan deal, the president had to choose between his promise of fostering national unity and a commitment to transformative change. The final measure whittled down much of his initial vision to invest in roads, bridges, water systems, broadband, ports, electric vehicles and the power grid. Yet the administration hopes to sell the new law as a success that bridged partisan divides and will elevate the country with clean drinking water, high-speed internet and a shift away from fossil fuels. 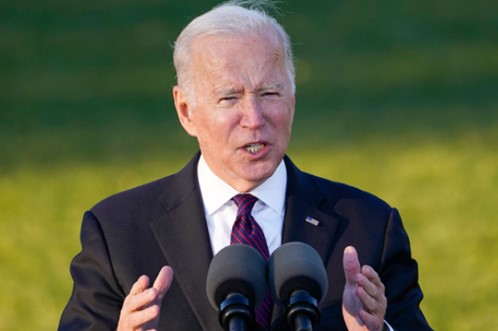 The load to truck ratio from DAT is a strong indicator of the balance between demand and capacity. Changes in the ratio could mean changes in rates. The higher the ratio, the tighter the capacity is for a particular state.  As of November 15, 2021 DAT Hot States, the state with the highest load to truck ratio was Montana at 25.17 and the lowest New Hampshire at 1.78.

The U.S. Bank Report, which is based on $31.4 billion in freight payments, cited the following impacts for this quarter’s performance:

Unlike other freight payment indices, the U.S. Bank Index breaks freight spend and shipments into four regions, which showed mixed results for the third quarter.

After declining for the previous two weeks, last week’s national average dry van spot rate remained unchanged, which is quite unusual for end-of-month. It’s another sign that the past 12 months of tight capacity is easing. 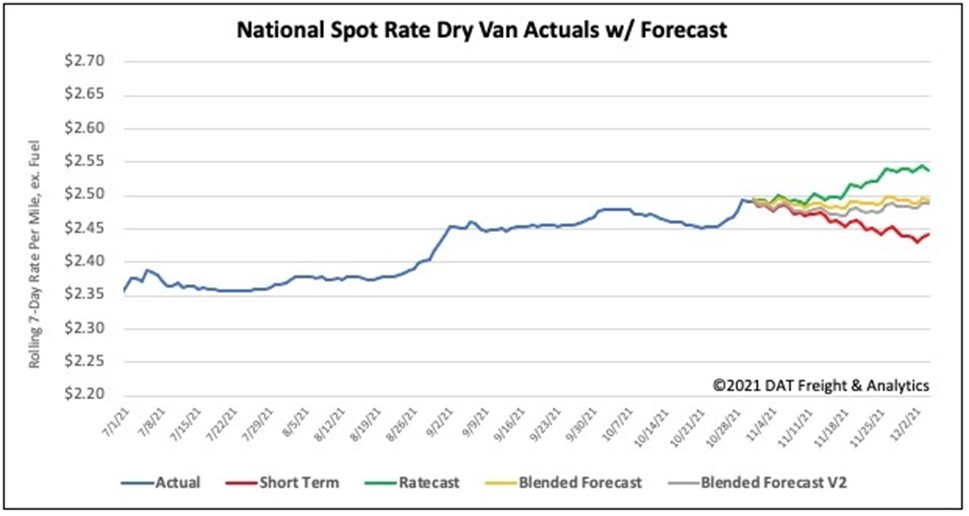 Ports and Airports Continue Climb Back to Normalcy

With a year plagued by severe weather and coronavirus recovery, ports across North America are clamoring to stay ahead of the cargo backlogs and shipments. Many ports experienced drastic changes in expected shipments as China and other major exporters continued to struggle with industrial output.

Even as most businesses recover, supply chain bottlenecks are expected to continue.

The changing demands on global shipping have caused the price of container shipping between China and the West Coast to increase by 90% compared with 2019, according to the U.S. Maritime Administration. 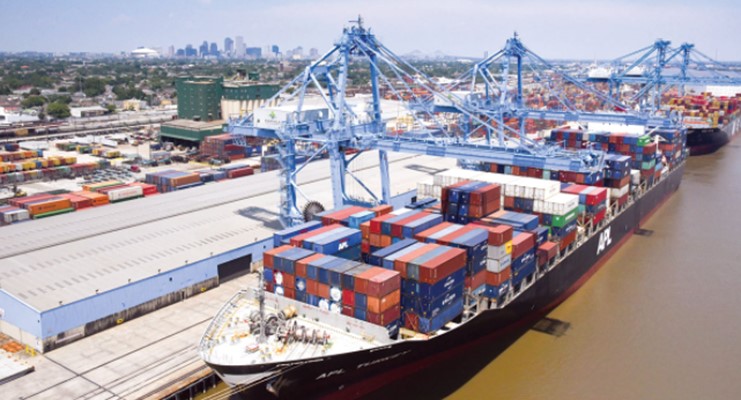 Amid continuing recovery from the pandemic, disruptions at airports and warehouse facilities have dropped significantly — and at the perfect time — as freight needs erupt across the country.

Air cargo at the top five airports has seen combined growth of 6.48 million tons in the past year. According to the Airports Council International, North America is home to five of the top 10 busiest air cargo hubs in the world, with Memphis, Tenn., at No. 1.

The FedEx Express World Hub, based out of Memphis International Airport, accounted for nearly all of the 4.61 million tons of cargo that was handled in the previous year at the airport.

In the recent weeks, the economy has shown renewed signs of life, with employers hiring workers in greater numbers than they have in months. The improvements followed a hiatus in the recent months which was caused by the latest coronavirus surge and by supply chain problems that have delayed shipments, hindered manufacturers, and left vacancies on the shelves of grocery stores.

Through the past 20 months, the combination of supply bottlenecks and a surge in household incomes fueled by pandemic-related government aid pushed personal consumption to a 30-year high in recent months. Policymakers still largely expect the rate of price increases to ease without raising interest rates sooner and higher than expected.

Doug
Frank
Senior Vice President of Procurement
Doug Frank is the Senior Vice President of Procurement at GEODIS, supporting our Contract Logistics team in the Americas Region with over 20 years of Supply Chain experience. Doug is a seasoned Supply Chain subject matter expert who provides guidance to position GEODIS as an industry thought leader.
Connect with Doug on LinkedIn
Author
Doug
Frank