Our monthly Industry Update provides an overview of what’s impacting the U.S. transportation industry nationally and globally. This edition covers updates for October 2021.

The American economy advanced an annual 6.7% on quarter in the second quarter of 2021, slightly higher than early estimates of 6.6%. The rapid spread of the coronavirus delta variant, supply-chain disruptions, shortage of workers and a cooling housing market are seen weighing on the growth for the rest of the year.

The ISM manufacturing index increased 1.2 points in September to a strong reading of 61.1. However, the improvement did not come in areas most directly associated with transportation. U.S. industrial production increased 0.4% in August, but the impact of Hurricane Ida shaved 0.3 of a percentage point off of total production. Manufacturing increased by 0.2%, but the hurricane closed plants for petroleum-based products. 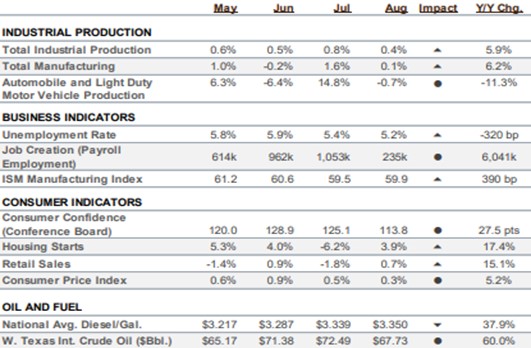 Retail sales surprised on the upside in August, rising 0.7% and up 15.1% from a year earlier. There was a large downward revision to July’s number, where sales fell 1.8%. Total sales excluding motor vehicles and parts were up 1.8% in August and 0.8% excluding autos and gasoline.

The U.S. Bureau of Labor Statistics reported that total nonfarm payroll employment rose by 194,000 in September, and the unemployment rate fell by 0.4 percentage point to 4.8%. 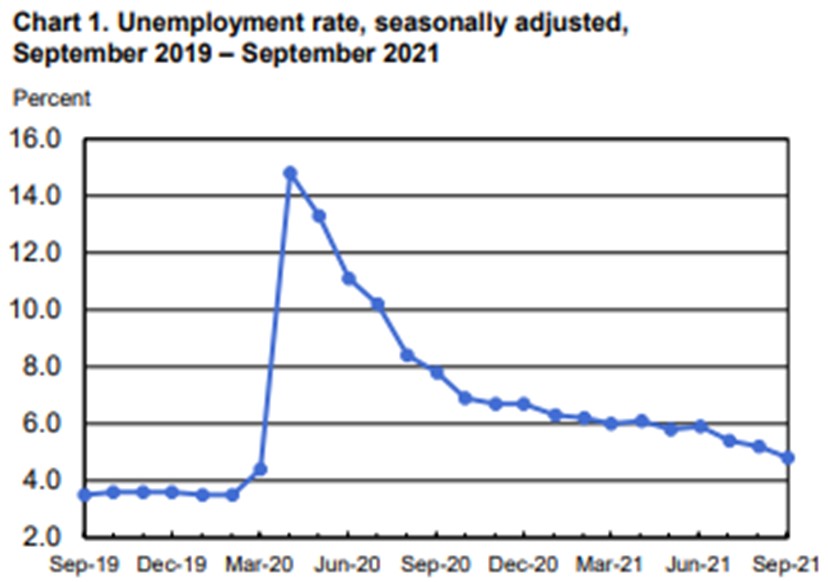 Diesel prices are moving sharply higher. During the week ended October 4, the national average price of diesel rose 7.1 cents — the sharpest increase since March — to $3.477 a gallon, which is the highest price since December 2014. U.S. regular gasoline retail prices averaged $3.18 per gallon (gal) in September, up 2 cents/gal from August and almost $1/gal higher than in September 2020. Total U.S. crude oil production averaged 11.3 million b/d in July — the most recent monthly historical data point.

Uncomfortably high inflation will grip the U.S. economy well into 2022, as constrained supply chains keep upward pressure on prices and, increasingly, curb output, according to economists surveyed this month by The Wall Street Journal.

Economists on average see inflation at 5.25% in December, just slightly less than the rate that has prevailed since June. Assuming a similar level in October and November, that would mark the longest inflation has been above 5% since early 1991.

Concerns about limited supply are the main cloud over the outlook. Around half of respondents cited supply-chain bottlenecks as the biggest threat to growth in the next 12 to 18 months, while nearly one-fifth pointed to labor shortages.

Total truckload rates are still trending at about 18% higher for full year 2021. The forecast for 2022 is marginally stronger than last month at just above flat.

Intermodal rates are projected to remain on roughly the same course they were on last month. A slow decline in the rate of year-over-year increase is expected into the first part of 2022.

The Morgan Stanley index returns to outperformance and increases sequentially. This week the index outperformed seasonality after two consecutive updates of underperformance. Both demand and supply contributed to the outperformance as seasonal improvements and sequential increases were seen across the board.

The shipments component of the Cass Freight Index® slowed to just 0.6% y/y growth in September. On a seasonally adjusted (SA) basis, the Cass Shipments Index fell by 4.9% m/m in September, after a 4.8% m/m increase in August. The two-year stack reversed to a 1.3% decline from 3.7% growth in August.

Dry-van TL spot rates declined slightly over the past 30 days but remain 15% above year-ago levels. Strong demand trends (including above average use of spot market capacity) likely continue into the next 6+ months, likely offsetting initial signs of cyclical capacity expansion (Class 8 truck orders).

Refrigerated spot TL rates are 19% higher compared to year-ago levels. Our work indicates the largest disruption is on outbound CA markets and dislocation due to imbalanced demand.

DHL Express plans to raise rates for shipments for U.S. customers by an average of 5.9% starting Jan. 1, effectively matching a FedEx Corp. price increase for next year in an action that will raise costs for parcel shippers.

The increase will apply to U.S. account holders shipping to or from the 220 countries and territories DHL Express serves, a spokesperson said. The company, which operates mostly international delivery services in the U.S. with limited domestic operations, increased rates by an average of 4.9% for 2021, and by 5.9% on average for 2020. 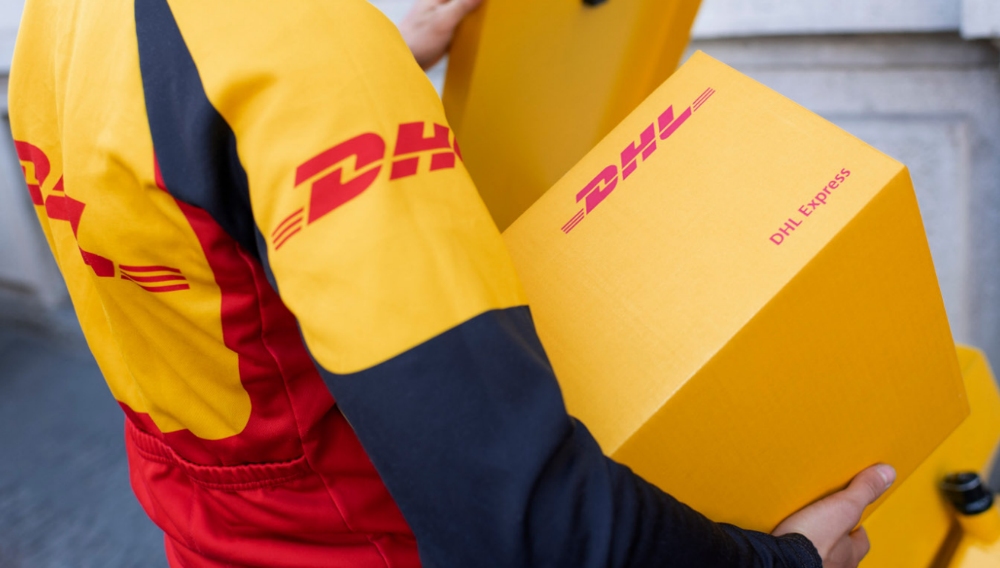 ArcBest sees billions of dollars in opportunities with MoLo acquisition

ArcBest (NASDAQ: ARCB) took a big step toward bridging the gap to a long-term goal with the acquisition of Chicago-based truckload broker MoLo Solutions. The deal advances a key initiative for the Fort Smith, Arkansas-based logistics and less-than-truckload provider — to grow its asset-light operations to a level equal to its asset-based trucking unit.

The deal will make ArcBest a top-15 truck broker in the U.S. with combined brokerage revenue of $1.2 billion. It will also double ArcBest’s platform to include 70,000 carriers. The deal is expected to close in the fourth quarter subject to customary closing conditions.

The Port of Savannah, Ga., the fourth-largest U.S. gateway for seaborne imports, is trying to clear a backlog of more than 20 container ships that has grown in the waters outside the port, in the latest logjam to hit the country’s swamped supply chains.

Between 20 and 26 vessels have been idling at a time in the Atlantic Ocean in recent weeks, including 24 that were waiting for berth space at Savannah on Tuesday, port officials said, while containers have stacked up for extensive periods on docks awaiting inland transport.

The backlog is the largest among East Coast ports that generally haven’t faced the kind of congestion that has snarled operations on the West Coast, according to maritime industry officials, including a persistent backup of container ships at the neighboring ports of Los Angeles and Long Beach. 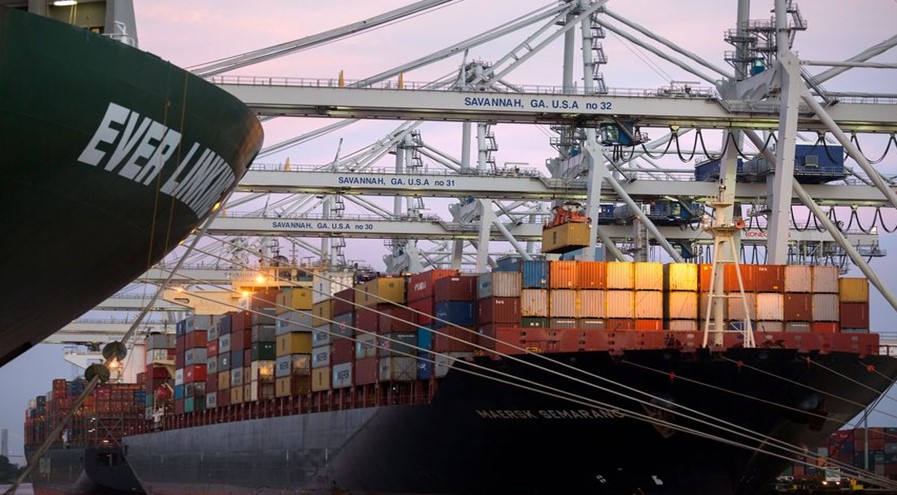 The load to truck ratio from DAT is a strong indicator of the balance between demand and capacity. Changes in the ratio could mean changes in rates. The higher the ratio, the tighter the capacity is for a particular state.  As of October 18, 2021 DAT Hot States, the state with the highest load to truck ratio was Idaho at 28.34 and the lowest Rhode Island at 3.18.

Used truck prices have increased by over 50% for 3-year-old models over the past 12 months. With the larger fleets struggling to recruit new drivers to the space, cost barriers will limit the small fleet/owner-operator growth as well, helping to extend the capacity crunch on all levels.

It is a well-known fact inside the trucking industry that over 90% of the fleets operating in the U.S. have less than 21 trucks. The barriers to entry for starting a trucking company are basically limited to the size of your wallet and your ability to finance a vehicle. This cost barrier has grown sharply over the past year — to a point where many are likely to forego the effort.

One day after announcing the Port of Los Angeles will begin operating 24/7, port officials said they were working feverishly to get ready for what promises to be a busy stretch.

“We’re moving as fast as possible,” said Gene Seroka, the facility’s executive director, during an Oct. 14 news briefing. “We are only 4½ weeks away from Black Friday. We have a lot of work ahead of us, but all of that conversation is pushing forward to getting everybody to open up each day of the week.”

Seroka was joined at the briefing by White House Port Envoy John Porcari, who said the White House is aware of the seriousness of the port congestion problems and is taking steps to solve it. 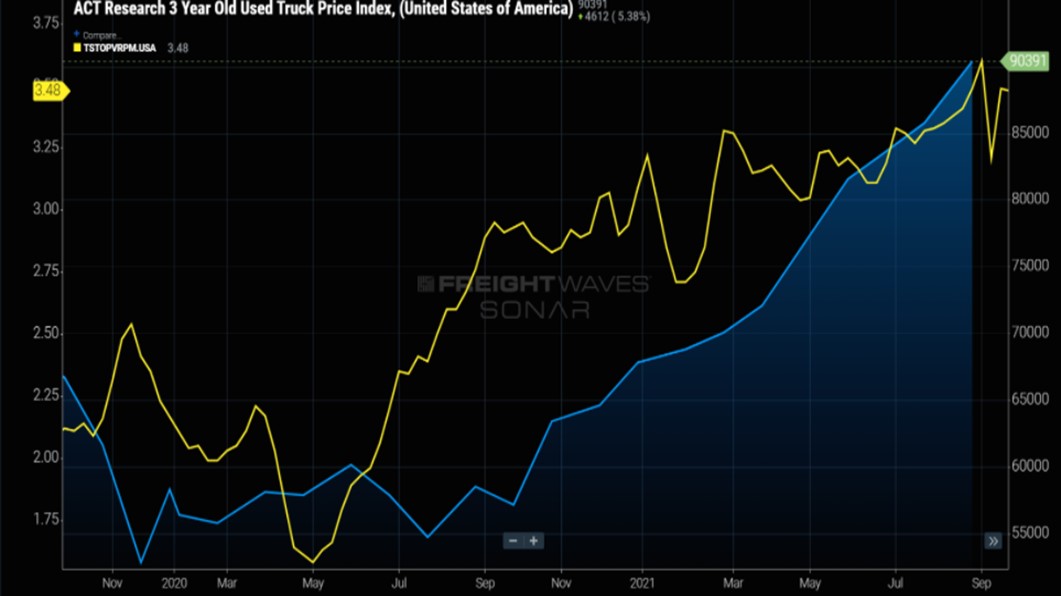 Eighteen months into the COVID-19 pandemic, economic forecasts suggest that the economy is on track toward a recovery. Throughout 2021, views have, on average, been consistently positive: the economy is improving, and the future is brighter still. Major estimates are showing that Q4 will show the strongest economic prospects seen all year, but projections for 2022 are showing a dimmer light until Q2 as the economy rebounds from the bottlenecks to the current supply chain industry.

Recently, the market has seen a spike in goods and services sales but there are fears that supply constraints could disrupt the holiday shopping season amid continued shortages. In the current inflated market, sales are forecasted to stall as the supply chain disturbances and microchip shortages linger through the industries and limit the selections for consumers. The biggest issues the market presents will be to keep shelves stocked, inventory steady, and a workforce to push through the backlogs.

Doug
Frank
Senior Vice President of Procurement
Doug Frank is the Senior Vice President of Procurement at GEODIS, supporting our Contract Logistics team in the Americas Region with over 20 years of Supply Chain experience. Doug is a seasoned Supply Chain subject matter expert who provides guidance to position GEODIS as an industry thought leader.
Connect with Doug on LinkedIn
Author
Doug
Frank